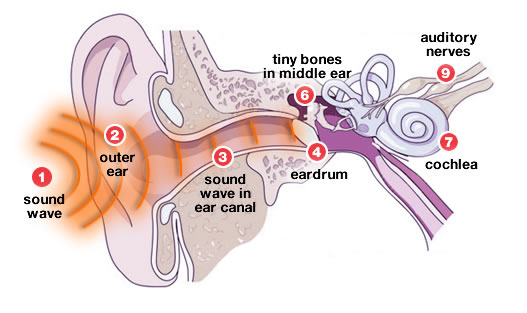 ‘AROUND ONE IN SIX OF THE UK POPULATION SUFFERS SOME FORM OF HEARING LOSS. SOME TWO MILLION USE A HEARING AID, BUT IT IS ESTIMATED THAT A FURTHER FOUR MILLION PEOPLE COULD BENEFIT FROM WEARING A HEARING INSTRUMENT.’

As well as being organs of hearing, ears are part of the mechanism that controls balance. They consist of three sections: the outer, the middle and the inner ear.

Sound waves (1) enter the outer ear pinna (2), the visible part of the ear along the side of your head, and then travel along the external auditory canal (3) towards your middle ear.

The middle ear is a space or cavity about 1.3cm across, filled with air. The cavity is connected to your nose and throat by the eustachian tube, the tube that ‘pops’ when in an aeroplane. When sound enters your ear canal and makes the eardrum (4) vibrate, these vibrations affect the ossicles (5). The ossicles are a chain of three tiny bones – the malleus, incus and stapes – which in turn conduct sound through to the inner ear.

The inner ear comprises two parts: the cochlea (for hearing) and the semi-circular canals (for balance).

The cochlea (6) is a coiled spiral tube about 3.5cm long, consisting of an outer and inner fluid-filled chamber. The inner chamber contains the organ of corti, which comprises 17,000 small hair cells. Each feature tiny hair-like structures called stereocilia, which project into the cochlear fluid. As sound waves enter the cochlea, the stereocilia move and so trigger an electrical pulse in the auditory nerve (7). The nerve passes electrical impulses to your brain, which recognises them as different sounds.

The semicircular canals are not used for hearing, but are part of your balance system. They are filled with fluid and have hair cells that project stereocilia, rather like those in the cochlea. These give your brain information about which direction your head is moving.

The most common cause of hearing loss is the ageing process. Other causes include hereditary factors, prolonged noise exposure, illness, accidents or medications. Hearing loss is mostly ‘sensorineural’, namely irreversible damage to the sound-conducting hair cells of the inner ear.

The degree of loss can range from mild to profound, and most people with hearing difficulties can benefit from using hearing instruments. Continuing to ignore hearing loss can affect your social life and relationships, and often leads to a feeling of isolation.